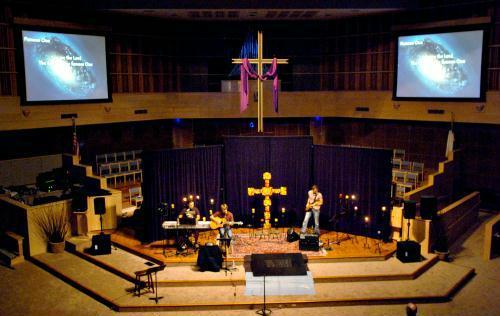 To be or not to be? The Walnut Creek Presbyterian Church is facing that crucial question today. Should the church become a satellite to Menlo Park Church or maintain the independence it has enjoyed for some 140 years? Should it become a part of the latest trend in church expansion known as multi-site or satellite-campus ministry? A decision is required soon.

Multiple WCPC leaders seem to be convinced that the satellite approach represents the best, perhaps the only, way to rebuild the church and expand its influence in the community. The satellite approach might prove to be cheaper than a rebirth effort if the church doesn’t have to purchase quality audio and video systems while recruiting and training technicians. The technology remains necessary for the creation of an immersive experience, but through the satellite approach, WCPC can become rather quickly a part of a broader religious community, one of many congregations of “one church.”

According to UNSeminary, however, 85 percent of multisite churches aren’t launching more than two locations. Major reasons for the limited launches include the following: Each campus has a distinct culture, unique demographics, an individual style of worship and a particular type of building in which the congregation collects.

Since each satellite location has a particular constituency, language usage and even humor differ among different constituencies. A sermon that might generate emotion or a response among members of a live audience often fails to engage the audience listening to a video-cast unless the presentation is professionally managed.

Finding a campus pastor whose personality is compatible with other pastors may prove to be very difficult or even impossible. The senior pastor may not always articulate what he/she is doing or expecting, bringing about misunderstanding or confusion on the part of the campus pastor. The most successful campus pastors appear to be recruited from within the local campus, thereby perhaps limiting communication and needed relationships between the senior and campus pastors.

A local pastor who has been employed by the church in which he or she is functioning can dispense a message that the minister of a multi-campus church cannot. The latter minister is unable to address personal issues and problems local congregants may face.

In an article titled “The 4 Huge Problems With Multi-Site Churches” published Nov. 12, 2015, on a blog listed as “Church,” Jim Sweeney focused in one section on the problem of local control, or a lack thereof, in relation to multi-site church organization. According to Sweeney, satellite churches tend to lessen the bond between a campus pastor and his community members, the attention of the satellite church being shifted from the local community to the main church, to the disadvantage of the local campus and its community.

Finally, in the UNSeminary podcast titled “6 Dirty Secrets about Multisite Churches That (Almost) No-One is Talking About,” and posted on Nov. 14, 2017, Rich Birch contends that the ability of older locations that are part of multi-site churches to reach out to new people slows over time. New campuses seem to reach new people for some five years and then the ability to attract new
potential members diminishes rather rapidly and substantially.

Based on the research I have done over the past few weeks and conversations I have had. I feel strongly that WCPC will be putting itself in a tenuous position by joining Menlo Park as a satellite church.