My Word: It is time for world to notice the Arab-Palestinian conflict 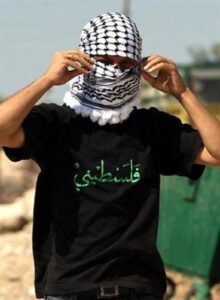 A Palestinian man wearing a T-shirt with the logo in Arabic that reads, “Palestine” covers his nose from tear gas fired by Israeli soldiers during a protest calling for the return of displaced Palestinians to their villages occupied by Israel in 1967, in the West Bank village of Beit Nuba, near the city of Ramallah, on June 9, 2012. ABBAS MOMANI/AFP/GettyImages

The attention-grabbing Arab-Israeli conflict hits the headlines almost daily. Gaza launches rockets at Israel and Israel retaliates. Israel destroys the terror tunnels dug by members of Hamas or individuals enticed into digging them. Talks in Cairo proceed or stall. The news regarding one or more of these details dominates broadcast news, print media and/or the internet. Commentators and experts devote considerable time to explain every phenomenon.

But seldom does the more intractable Arab-Palestinian conflict draw attention to itself. Jordan, for example, stripped many of the Palestinians resident in the country of their citizenship back in 2009 without much fanfare. The purpose of the removal of thousands of citizenship was the reduction of the number of Palestinians in the kingdom. The government of Jordan has never really liked hosting large numbers of Palestinians.

Syria attacked and destroyed many Palestinians in the 1980s; Lebanon wages war against the Palestinians forced to reside in that country through discriminating policies and laws. The Palestinians can’t own property and are forbidden to work in many professions. They can’t become citizens. The refugee camp near the Beirut-Rafic Hariri International Airport has long been a disgrace to humanity.

Saudi Arabia has never trusted the Palestinians, even those willing and able to contribute to the economy of the country. As early as the late-1960s, participants in public gatherings could feel tension if and when Palestinians were present. Guards were often posted throughout the crowds.Concern about the Palestinians’ intentions and possible actions was evident.

The Arab-Israeli conflict remains a major concern for many countries and it should. The loss of life and the social upheaval brought on by such battles as those occurring quite frequently between Hamas and Israel disrupt the lives of many people on both sides of the question.

Peace talks between and among the various factions appear at times almost comical but one hopes will ultimately end in some type of accord. Israel continues to be maligned for its treatment of the Palestinians and the mistreatment should not be dismissed out of hand.

The various Arab states must forego many of their fears and hatreds of the Palestinians and agree to work with the international community in helping the Palestinians establish a home and an existence worthy of any group of human beings.

They should cease using Hammas as the ploy or front man in their attempt to gain advantages over Israel. They should become more realistic and acknowledge that Israel will likely become an increasingly strong nation with which they will have to build, whether or not they wish to do so.

Israel must continue to defend itself against brutal attacks but should begin to develop a regional plan that clearly shows the Arab states how they can benefit from Israeli aid and manpower.

To illustrate, Iran benefited from Israeli expertise in agriculture prior to the Islamic Revolution and the two countries enjoyed cordial relations under the Shah.

The United States, in turn, must abandon its narrow Arab-Israeli approach to Middle East diplomacy and tackle the Arab-Palestinian along with the Sunni-Shiite and Saudi Arabia-Iran conflicts simultaneously and with diligence.

Much greater weight must be given to the Arab-Palestinian mistrust and conflict. Only with a broader and more enlightened approach to the Middle East can the U.S. hope to move the region toward peace and prosperity.