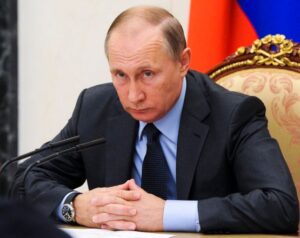 FILE – In this Sept. 7, 2016 file photo, Russian President Vladimir Putin holds the Cabinet meeting in Moscow’s Kremlin, Russia. Recent hacks of election data systems in at least two states have raised fear among lawmakers and intelligence officials that a foreign government is trying to seed doubt about – or even manipulate – the presidential race, renewing debate over when cyberattacks cross red lines and warrant a U.S. response. (Mikhail Klimentyev/Sputnik, Kremlin Pool Photo via AP, File)

Donald Trump’s repeated praise for Vladimir Putin as a leader has resulted in harsh criticism from Hillary Clinton, strong anti-Trump comments from Democrats and expressions of vexation among Republicans. But little, if any, attention has been given to the possible veracity of the praise, its applicability to the United States and the American political scene or cooperation between Russia and the United States.

Among the qualities that theoretically make a great leader are these: focus, confidence, integrity, inspiration, passion, decisiveness, empowerment, communication and accountability. Certainly, Putin has focus and confidence. He has shown a determination to reconstitute the Soviet Union through the illegal invasion and annexation of Ukraine’s Crimea Peninsula. His entry and assumption of a major role in the Syrian debacle provides further evidence of his focus and confidence.

In the eyes of many Americans, the takeover of parts of the Ukraine clearly points to Putin’s lack of honesty and strong moral principles, but if viewed from the Russian perspective, the takeover can be defended as a return to the fold of a significant part of Russia from the late 18th century first as a state of the Russian Soviet Socialist Republic and later as a state of the Ukraine Soviet Socialist Republic. Putin probably regards the Crimea and Ukraine as Russian possessions illegally lifted from Russia’s treasure chest and worthy of repossession.

In 2013, Putin presumably had an op-ed piece published in the New York Times, warning the U.S. against the use of force in Syria and poking fun at the U.S. for its feelings of superiority. The piece was met with American surprise and considerable criticism but it prompted the U.S. to follow a more diplomatic path to the Syrian conflict and put Putin and Russia in a stronger position in pursuing a settlement of the conflict.

This lack of willingness to assume responsibility is understandable if viewed from the perspective of a dictatorial regime does greatly reduce the credibility of a democratic country’s leader, but may increase the power and effectiveness of the leader of a dictatorship.

Leadership in Russia and the United States may require different emphases but does involve the application of many of the same leadership traits. Further, leadership often requires a change of focus and commands respect for both the minor and major accomplishments of a leader. A leader plays to win.

Reluctantly, an observer must concede that Putin has shown greater leadership within the context of the Russian system and with the use of many of the accepted leadership traits than have his American counterparts.

America needs a strong leader to return the U.S. to its glory days but the return will not occur through the use of verbosity and negativism. America can continue to be strong and become stronger only with true leadership. America needs a democratically-oriented Putin.